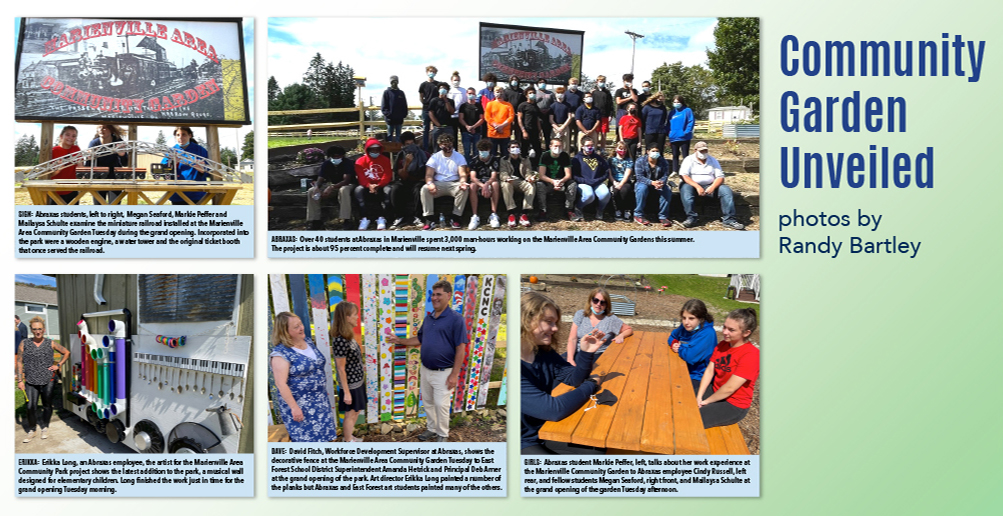 MARIENVILLE — East Forest principal Deb Arner planted the seed and, with the help of Abraxas, it grew into the Marienville Area Community Garden.

Tuesday the finished product was revealed to the community with a grand opening. “This started with the Four Season Trail and we got part of the end of the property to put in a community garden,” said Arner. “It started out slow with the kids clearing the land and then this year it exploded with the help of Abraxas students and the Office of Vocational Rehabilitation.

“I am so pleased with the outcome,” said Arner. “It would have taken us years to do this without the help of Abraxas. It is a nice place for the whole community. “

Arner said it was a nice addition to the new section of the Marienville Library.

“Deb has been instrumental in galvanizing the community around this project,” said East Forest Superintendent Amanda Hetrick. “She planted the seed and the garden grew.

“Erikka Long has been an excellent partner,” said Hetrick. “It has been a marvelous effort.”

‘For the first crew we had in here it was brutal,” said David Fitch, Workforce Development Supervisor at Abraxas Monday. “They dug the whole area out by hand and carried all of the railroad ties out of the woods.”

Fitch said Abraxas students have performed other community projects but the community garden was the largest.

The project incorporated the library and the railroad heritage into the park. The Marienville Library allowed the students to put large, wooden, flowers on the side of a building and a small free library in the park. The little library resembles the original railroad ticket booth that stands in the park. A water tower will be functional that will allow people to draw water for the plants in the garden.

Fitch said the project had a lot of help from the community. “Jenks Township put in a split rail fence and helped drill the holes,” he said.

Fitch said more than 40 students worked on the project investing more than 3,000 man-hours. About a dozen Abraxas staff members helped the students.

Fitch said the park is about 95 percent complete for this year. He added that the project could be a multiple year effort.