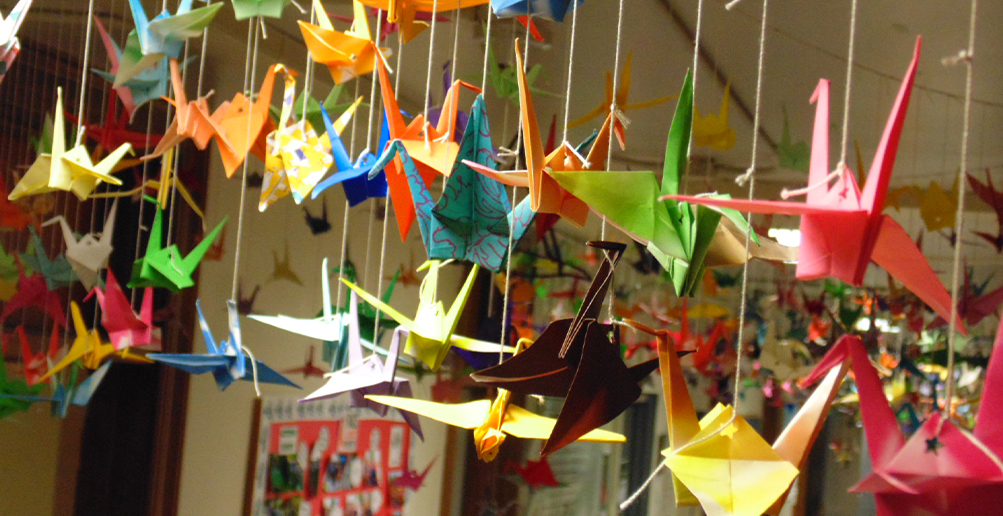 The Story of Sadako and the Thousand Paper Cranes inspired students and staff at AYC to create a project to honor a long time employee and friend.

Sadako was only 2 years old when an atomic bomb hit Hiroshima. Later when she was 12, she was diagnosed with Leukemia which came from exposure to radiation from the bomb. Sadako believed the Japanese legend that if a person folded 1000 origami cranes they would be granted a wish. Sadako wanted to fold the cranes to be granted her wish…..to stay alive There are a few versions of Sadako’s story 1) she was unable to finish the 1000 cranes so her friends finished them and buried them with her when she passed away and 2) she was able to exceed the 1000 cranes and had folded about 1400 at the time of her death.

Mr. Cledus Paskins began his career with Abraxas 23 years ago and he oversaw the daily operations of the AYC Secure Treatment Learning Center for the past 14 years. In the summer of 2018 he was diagnosed with cancer. As he battled cancer he continued to work. He continued to be a positive influence on youth while helping to transform their lives. As big as the impact that he had on the youth he worked with, the same held true to the staff that were fortunate enough to work alongside of him. Students and staff decided to start the project of making 1000 cranes to help inspire him during his fight with cancer. He enjoyed working with the students on the project. He was always so humble, he didn’t want people to fuss over him.

Unfortunately, the cranes were not completed in time to grant him his wish, much like the Japanese legend. Mr. Paskins passed away on December 30th, 2018.

Students and staff completed folding the 1000 origami cranes and they were strategically placed in the hallway that he had walked down so many times. The cranes fly high in honor and in memory of a great man, a great friend and a great Abraxas team member. His spirit now flies among the cranes.